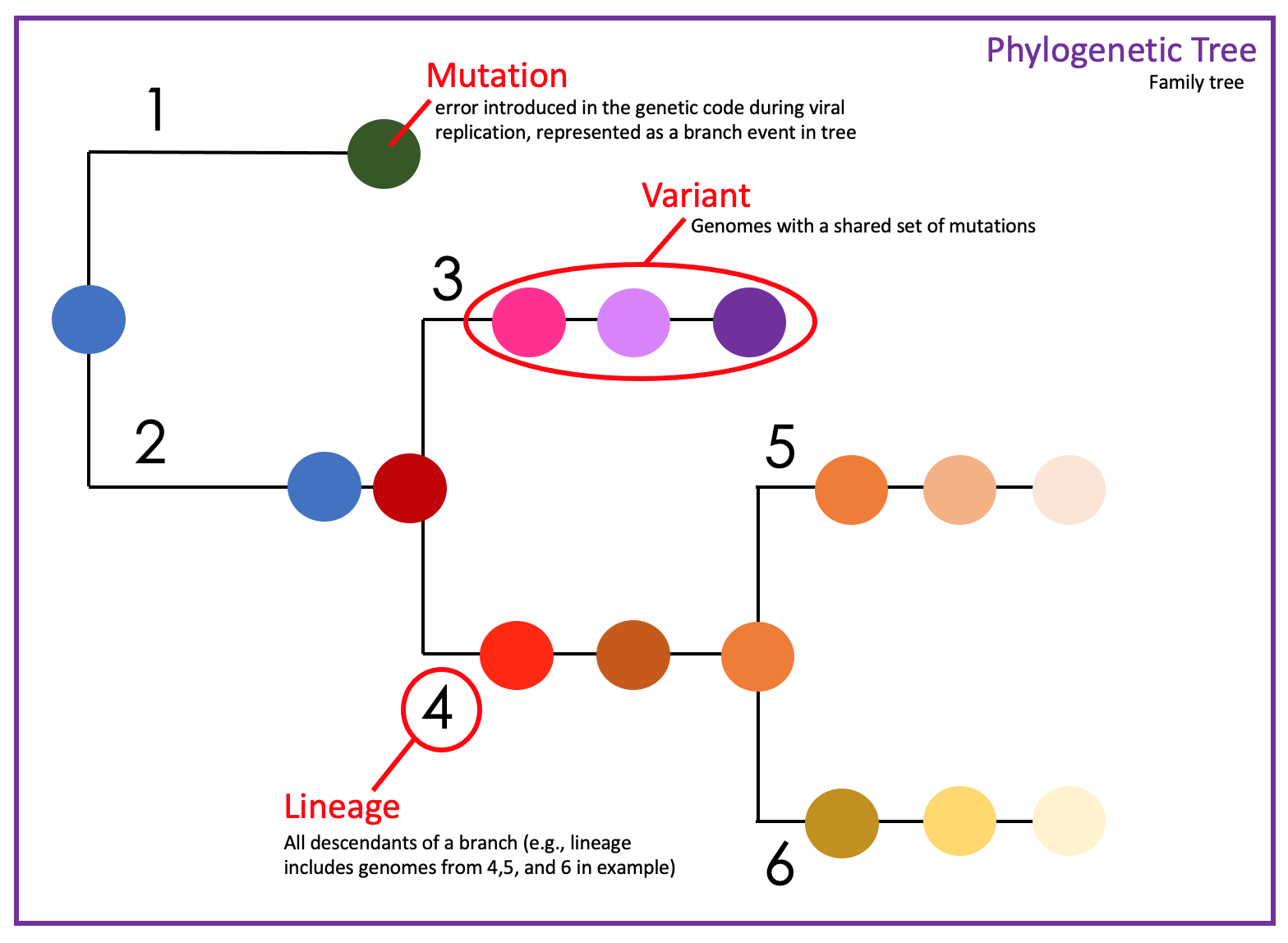 Variants of Concern in the Context of Alaska

Below you can find information about VOC’s and when they were first detected in the state of Alaska.

VOC Omicron, also known as B.1.1.529, was reported to the World Health Organization (WHO) November 24, 2021. This variant was first detected in specimens collected from Botswana and South Africa. Shortly after first detection, Omicron was classified as a VOC based on epidemiological data that associated it with an increase in infections in South Africa. Since then, Omicron has spread to countries across the world including the United States.

The classification of Omicron is constantly in flux. As of the end of January 2022, sublineages of Omicron include BA.1 through BA.3. Tracking these Omicron sublineages remains important given the slight genetic variations that contribute to key characteristics such as transmissibility. For example, BA.2 has several genetic differences from BA.1, including changes to the spike protein, that have contributed to a slight advantage in terms of transmissibility. This slight difference in transmissibility appears smaller than the difference between transmissibility of BA.1 and Delta. Another sublineage, BA.1.1, contains the R345K mutation which poses a specific threat to Sotrovimab monoclonal antibody effectiveness. This is concerning because Sotrovimab was the best monoclonal antibody therapy for Omicron prior to BA.1.1.

Omicron contains at least 30 amino acid substitutions, three small deletions, and one small insertion in the spike protein. Of these 30 mutations 15 are amino acid substitutions found in the receptor binding domain (RBD). The spectrum of mutations in Omicron likely contributes to higher transmissibility than the original SARS-CoV-2 virus, however, how easily Omicron spreads compared to Delta remains unknown. More data is needed to determine if Omicron causes more severe illness or deaths than other variants.

In Alaska: Omicron was detected in a sample collected late November 2021 from the Anchorage/Mat-Su region.

Delta was first identified in India in late 2020, also known as: Variant of Concern B.1.617.2, 20A/S:478K. The Delta variant has become widespread over the last number of months and B.1.617.2 is the predominant lineage in many countries worldwide.

Classifications of Delta lineages by the Pango nomenclature system are in constant flux, however, all AY designations are sub-lineages of the Delta variant. An AY designation doesn’t imply any functional biological difference from B.1.617.2. In addition to B.1.617.2, Delta also contains lineages AY.1 – AY.25. The AY lineages break up B.1.617.2-like viruses into smaller related clusters that can be tracked separately. Here we seperate Delta sub-lineages based on their prevalence in Alaska with designations updated weekly based on updated Pangolin designation. The CDC reports AY.1 and AY.2 separately from the parent lineage B.1.617.2 due to the mutation of interest: K417N in Spike.

Delta contains key mutations in the S gene: K417N, T478K, L452R, N501Y, P681R, and others of unknown significance. The spectrum of mutations in Delta evades binding of neutralizing antibodies induced by natural infection or vaccines to a measurable extent. This variant has significantly increased transmissibility. It is currently unclear whether Delta is associated with increased severity of infection. According to CDC data, Delta is currently driving case numbers and COVID-19 hospitalizations in the US, particularly among unvaccinated individuals.

In Alaska: Delta was identified in late May 2021 in the Anchorage/Mat-Su region. Cases have now been detected in many additional locations in Alaska. Delta VOC has predominated the surge of cases in July-September 2021 in Alaska. In Alaska, we have the original B.1.617.2 as well as a significant proportion of several sub-lineages.

Variants of Interest in the Context of Alaska

Below you can find information about VOI’s and when they were first detected in the state of Alaska. Currently there are no variants classified as VOIs in Alaska.

Variants Being Monitored in the Context of Alaska

Below you can find information about VBM’s and when they were first detected in the state of Alaska.

Alpha was first identified in the United Kingdom. December 29, 2020 alpha was classified as a as Variant of Concern but as of September 21, 2021 was downgraded to a VBM. It is also referred to as variant B.1.1.7, 202012/01, VOC-202012/01, 20B/501Y.V1, 20I/501Y.V1. This variant contains the N501Y mutation and a short deletion in the Spike (S) protein. This variant is concerning because it has shown to be significantly more transmissible (~50%) than the original SARS-CoV-2 lineage. Alpha does not appear to evade vaccine-induced neutralizing antibody responses. Alpha is still circulating in the US.

In Alaska: Alpha was detected in December 2020 in the Anchorage/Mat-Su region. Cases have been detected throughout Alaska.

Beta (also known as: B.1.351, 20H/501Y.V2) was first identified in South Africa and is circulating in the US. It was classified as a VOC December 29, 2020 and as of September 21, 2021 was downgraded to a VBM. The B.1.351 has both N501Y and E484K mutations in the Spike protein. This variant is concerning because it is significantly more transmissible (~50%) than the original SARS-CoV-2 lineages. Preliminary studies suggest Beta, like Gamma, may escape some vaccine-induced and naturally acquired antibody responses. However, as with all VOCs, the Pfizer, Moderna, and Johnson & Johnson/Janssen vaccines remain largely effective against this lineage.

Gamma was first identified in Brazil, also known as: P.1, B.1.1.28.1, 20J/501Y.V3. It was classified as a VOC December 29, 2020 and as of September 21, 2021 was downgraded to a VBM. This variant contains three key mutations in the S gene: E484K, N501Y, and K417T. While preliminary studies suggest the Pfizer, Moderna, and Johnson & Johnson/Janssen vaccines currently deployed in Alaska may have reduced efficacy against Gamma, these vaccines remain largely effective against this lineage and demonstrate protection against serious illness, hospitalizations, and death. Recent analyses suggest that Gamma may be more transmissible with higher risk of severe disease, to some degree.

In Alaska: Gamma was identified in early February 2021 in the Anchorage/Mat-Su region. Cases have been detected throughout Alaska.

Epsilon, includes B.1.429 and a related B.1.427 lineages, were first identified in California and known as: CA VUI1. The prevalence of these VOI grew in California from initial observations in summer 2020 and has spread to many other states. Research suggests an increased transmission (~20%). Deescalated from a VOC on June 29, 2021 due to the significant decrease in the proportion of B.1.429 lineage viruses circulating nationally and available data indicating that vaccines and treatments are effective against this variant. Since September 21, 2021 epsilon has been classified as a VBM. This variant is characterized by the L452R mutation in the S gene and is genetically like B.1.351 but lacks several key mutations.

In Alaska: These variants have been detected across Alaska beginning in December 2020. This VOI has not been detected in Alaska since May 2021.

Iota (also known as B.1.526) was first identified in New York and has begun circulating in other parts of the US. Little is known about this variant, but some genomes contain the E484K mutation in the Spike protein.

In Alaska: The B.1.526 variant was identified in February 2021, in the Anchorage-Mat Su region. Cases have been detected throughout Alaska.

Eta (also known as B.1.525) is circulating in New York and has begun circulating in other parts of the US. Little is known about this variant. The genomes contain the E484K, Q677H, and F888L mutations in the Spike protein.

In Alaska: The B.1.525 variant was identified in March 2021, in the Gulf Coast region. This VOI has not been detected recently in Alaska.

Zeta was first identified in Brazil and is also known as: P.2 or B.1.1.28.2. Little is known about this variant beyond that its prevalence grew in Brazil. This variant contains the E484K mutation in the Spike protein but lacks many key mutations in other variants of concern.

In Alaska: The P.2 variant was identified in January 2021, in the Southwest Alaska region. This VOI has not been detected recently in Alaska.

Mu was first identified in Columbia in January 2021 and is also known as: B.1.621. This variant has been detected in North and South America, Europe, and Asia. There are several mutations in this lineage that affect the Spike protein including I95I, Y144T, Y145S, R346K, E484K and N501Y in the Receptor Binding Domain and P681H in the S1/S2 cleavage site. Little is known about the potential biological and epidemiological roles of these mutations.